I decided to sneak some parts of Aseed post that is an essential to Yemeni traditional cooking in Ramadan.Its is the broth.  Chicken, or meat broth is used in cooking different soups,cooking rice with it, or with Saltah too.
I felt it needed to be honored with a post on its own .You can use the same ingredients for Meat if you wish , but give it more time to boil and get tender.
Wish you a good appetite!

1 whole Chicken with bones, cleaned with water and salt, skin and fat removed. 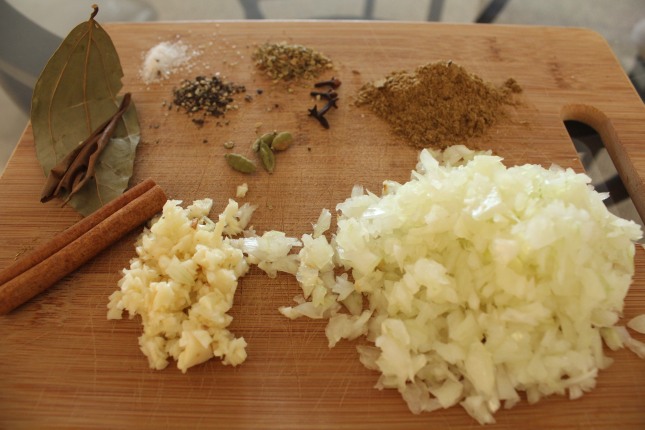 Preparation
– First add the oil in your deep pot, heat it, and put the onions, wait until golden

-Follow with garlic and the spices, then the potato.

-Put the chicken pieces and keep moving them in the pot under the heat and follow with water.

-Boil until chicken is tender and potato is soft. 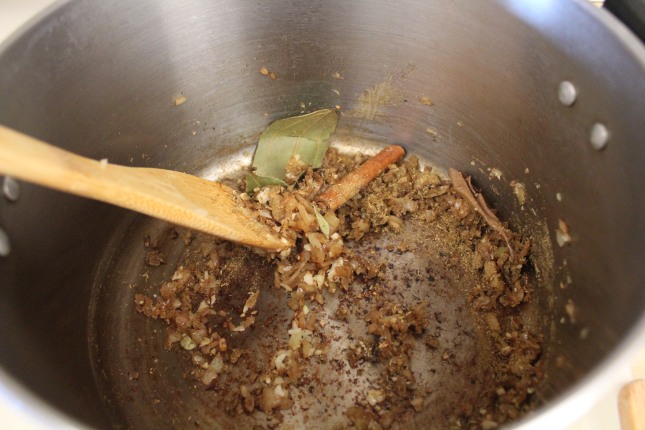 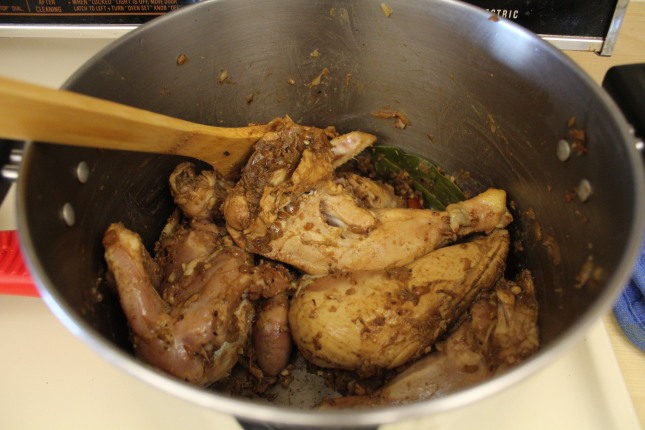 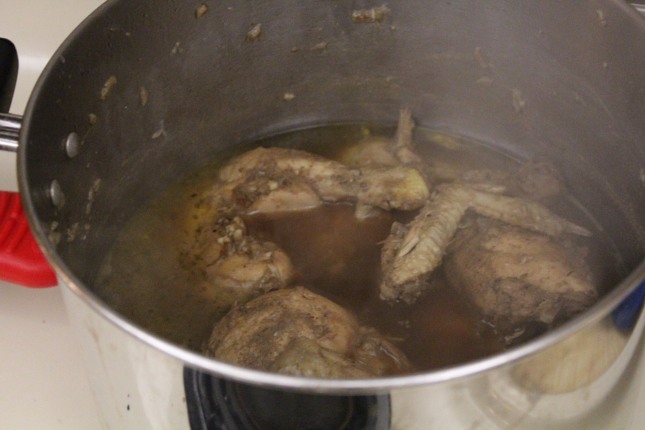 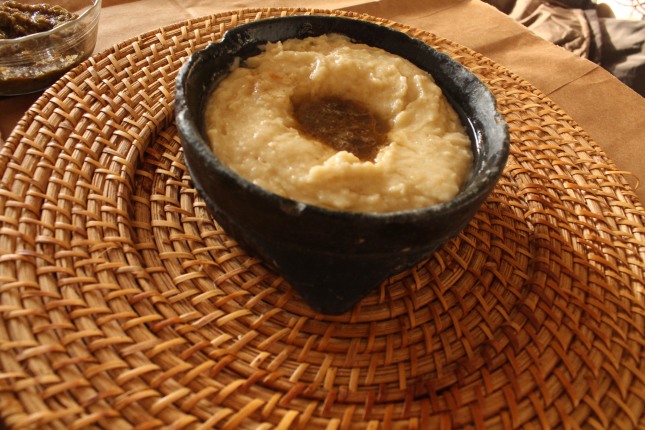 Aseed is an absolutely true Yemeni dish .A dish that you could find in the table of rich or poor equally sharing it with pride with their guests without the awkwardness of thinking of giving you an extra plate or spoon to yourself. You simply dig in with your fingers, communally sharing it with the rest. This act is enough to break the ice with people you don’t know in the table, so if you find yourself eating it with others don’t be shy and go for it, or you will find yourself leaving the place hungry. It’s served boiling, and Yemenis are fast eaters because they like their food burning hot!

This reminds me of a story of my husband, who invited an American friend to have lunch with his family in a restaurant, so he joined in, food was served, everyone was enjoying their meal, it wasn’t long until they were asking for the check and leaving. Later, the American friend called my husband and asked him if he offended his family by any way?!

Astonishingly my husband answered:” not at all, infact they like you!”.. And followed Asking with why did he feel this way? So he goes “you guys finished eating and left the restaurant so quickly, I thought I did something wrong!”..My husband went laughing, “Yemenis eat, they don’t dine”!

So that’s one of the cultural things you will learn about Yemeni eating habits , where they spend less time eating, and more time later in the afternoon, socializing while chewing qat or on a cup of Kisher coffee.

In the past however, that was a time spent by tribal nomads traveling for survival in the wilderness. It’s an eligible question to ask how would traveling tribes would make Aseed if they didn’t by the nature of their life style farm and cultivate grains. The truth is, Yemeni tribes realized how harsh it could be to wander in this vast land. With their survival instincts, and some engineering skills they managed to make dams right, and save water. The grand Dam of Mareb,(790 b.c-325 a.d) (1) is the most famous one as it was the nuclear beginning of Sheba’s Kingdom, and led later to its control on merchants routes to Mecca and around the region, it truly established their civilization. Old Yemeni civilization is a result of Bedouin urbanization and their understanding the importance of water. A hierarchal transition from living in the tent was living in mud houses.Thats how Yemeni tribes differentiated themselves from other tribes in the Peninsula. For the first time they became to be known as a state. 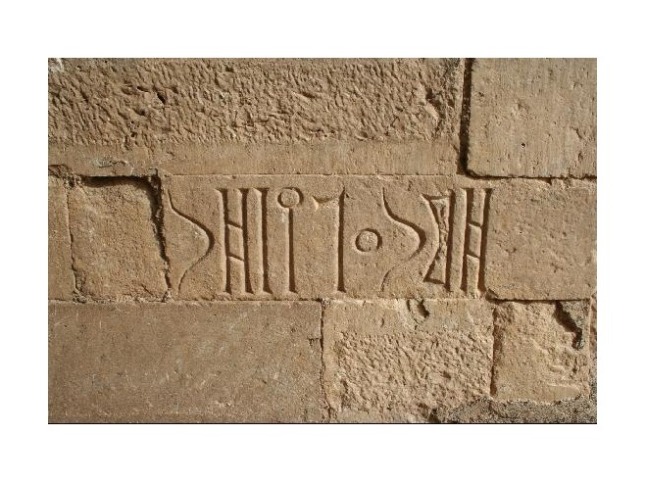 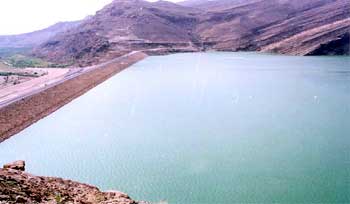 That being said, with Mareb’s Dam demolition at 575 a.d (2), Yemeni tribes experienced the biggest migration wave through its history to areas with bigger sources of water. They even reached up to Egypt, Iraq, Jordan and Palestine. Yemenis didn’t want to get back to the life of constant traveling from one place to another. Yemeni Tribes found themselves needing to travel long distances across the mountains and in the desert with minimum luggage and Aseed fulfilled that need as a truly minimal dish that needs the least ingredients and fills them up like no other! They just needed one pot, one Wood spoon (Mihwash-محواش)or (Makhdoshمخدش-),Any shortening available, and pinch of salt!… Voila! Moreover, because it’s a heavy meal, it made them full for long hours, which was convenient since they won’t need to make fire for cooking every three hours for snacks!This recipe had varied and evolved in every region depending on what local crops were available.

Having a meal consisting of a cooked Flour and sort of sauce is common in many countries in the world, and not just Yemen,I recently found a recipe for English Dumplings with Stew,although the process of work is very different than Aseed,the recipe’s essence was very similar.

Aseed is also known in the south region of Saudia Arabia, Libya, and Sudan. Countries with tribal heritage knew Aseed as a filling dish, and as a complete meal in one serve. It can be made out of Wheat flour, Corn Flour, Pearl Millet flour-Dokhn ( (دخن, or literally any kind of grounded grain!-I don’t recommend using white flour though as its consistency is not as dense as others and get cold quickly, turning into a plastic textured mix- Its served either as a savory dish with meet/or chicken broth, or with different other dressings such as) Hakieen –(حقين which is close to buttermilk but with a deep smokey flavor or as a sweet dish with honey or dates. Either way it is considered as a main dish, as you will notice, Yemenis serve sweet dishes in the middle of the meal, especially on Friday’s lunches and when having guests.

The Middle region of Yemen, for instance adores dairy products, it has a long agricultural tradition as it has the most amount of rain water in the Arabian Peninsula­(2) This abundance of water and the fertile lands of Ibb, Taiz ,beside its relatively close distance from red sea, made Aseed coming from this region very unique. Some recipes are mixed with yogurt and herbs, or exquisite Tamarind sauce. One coming from Old city of Taiz, is even mixed with grounded dried baby fish (Wazef-وزف). Here I will start with a simple recipe for Aseed that is considered a standard recipe, and from there; will follow with more Aseed recipes in the future. 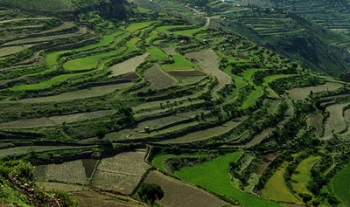 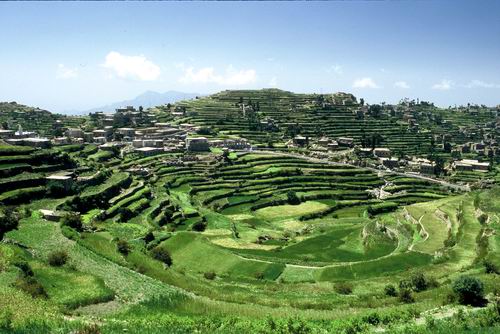 Sharing food from one dish with many people could actually be appalling to some, however, there are manners you can’t break when eating with others or you will be considered a pig that’s spoiling the meal for others so the plate could be all yours!

1-Rule of thumb, index, and middle. Only eat with those three fingers, never with your five, one hand only, not both.

2-Never ever let the food go above the first mark of your fingers, remember the more food goes up that mark; the most probably you will get it in to your mouth.

This is a common say you might hear if you tried drinking water while eating Aseed or right after. Try to not drink water or juice with it or directly following to it. As hot or spicy it can get, drinking water will make the grains you had in your stomach go swollen and bigger, bloating your belly and your intestines. A feeling of discomfort may continue up to two hours or more until your stomach is able to fully digest it.

5-You might encounter a burp or two while eating or after, to control the damage, make sure to handle the situation by closing your five fingers of your hand together like a boat shape, and put it closely to your mouth, followed by looking up, making sure to channel the smell upward ,and say “Alhamdulillah “ 🙂

This recipe calls for wheat flour, but you can use Corn Flour if you want.

2 boiled cups of water on the side

1 whole Chicken with bones, cleaned with water and salt, skin and fat removed. 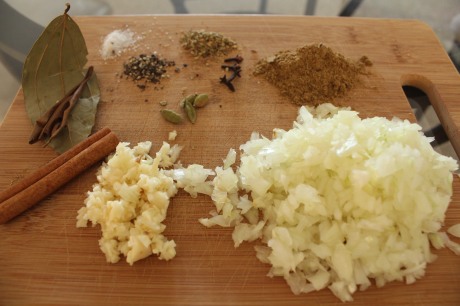 First thing first you have to know it is important that Aseed should be served very hot, even more hot than what people can handle, because it gets cold quickly, and it cannot be reheated as any other meal. It gets rubbery in texture, and you end up throwing the rest of leftovers. So make the Aseed later after you finished making the Chicken broth and the sour Hilba.

-Helba powder needs to stay at least 3 hours in water to be ready to be mixed therefore; I prefer to start doing this right away before anything else. 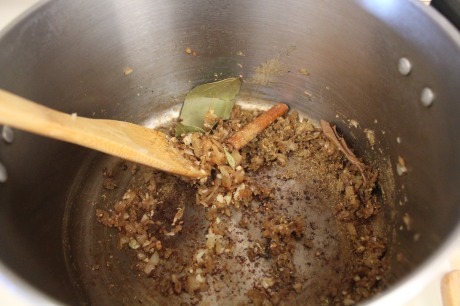 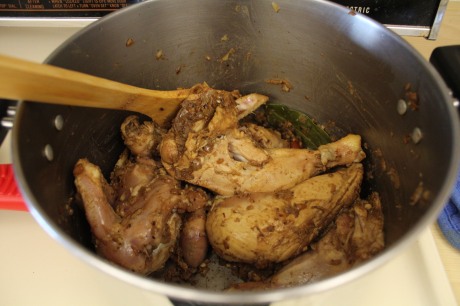 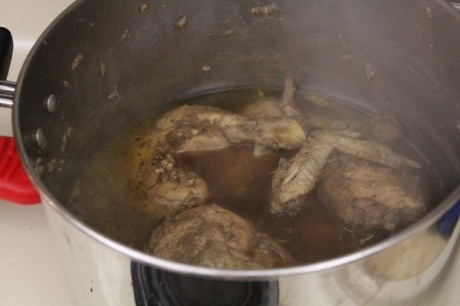 -Next comes the Chicken broth. First add the oil in your deep pot, heat it, and put the onions, wait until golden

-Follow with garlic and the spices, then the potato.

-Put the chicken pieces and keep moving them in the pot under the heat and follow with water.

-Boil until chicken is tender and potato is soft.

-Now get back to the Hilba, remove the water and start whisking it quickly with a wooden spoon. When it starts to get foamy and white, add the salt, and vinegar. Your Sour Hilba is ready 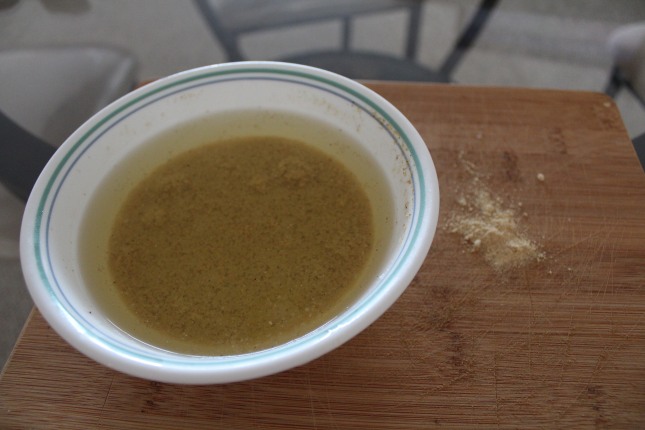 1- Hilba Powder to the right, and to the left Hilba soaked in water 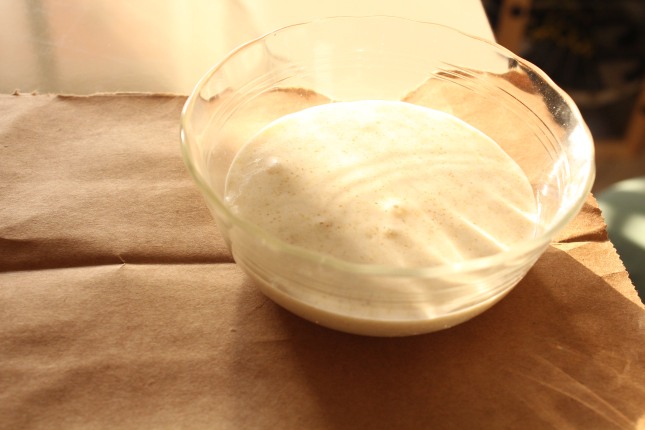 -Here comes the moment of truth with Aseed, make sure you grow some muscles, do some stretching before that workout, you will literally be kneading on fire! 🙂 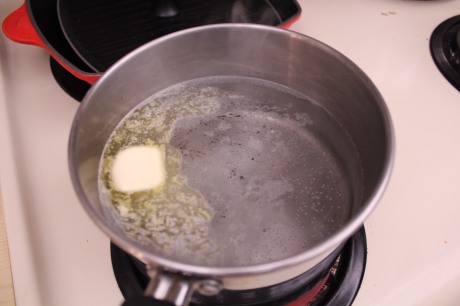 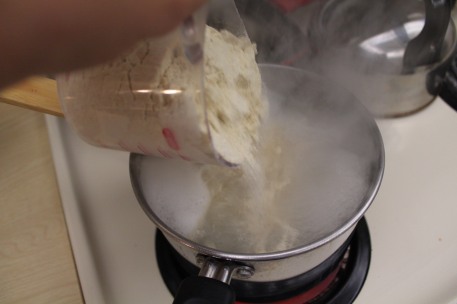 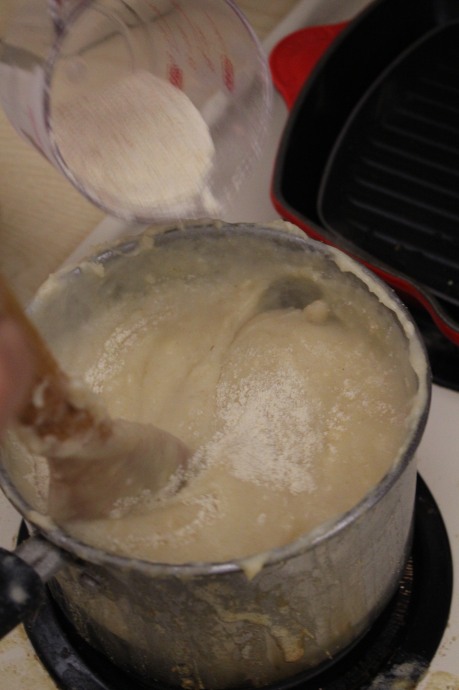 -Add the flour, and as you keep adding start moving the wooden spoon in circles quickly until it gets thicker and thicker, and harder to your hands.(Becarefull, the mixture may start to pop up some hot bubbles to your face, make sure you don’t get burned. You should be in total control with it.)

-Remove the pot onto the ground to be able to knead strongly, be comfortable to get the right angle while still kneading the Aseed quickly.

-If you find it getting difficult to control the consistency of the Aseed, and it started to have solid particles in your mixture, also called (Baraqit-(براقط, add some boiled water and knead more, DO NOT add cold water as it will harden the Aseed. Nobody likes( Aseeda mibarqataa,meaning Aseed with the solid particles –عصيده مبرقطة ) in their mouth .

-Now it’s finally turning smooth, get it back under low heat, add more boiled water, and let it cook, for 15-18 minutes..

-Again knead your mixture, and add more oil until its smooth.

-If you are serving in a different dish, move the Aseed and drizzle more oil and make the sides soft and smooth-no pressure though :):) 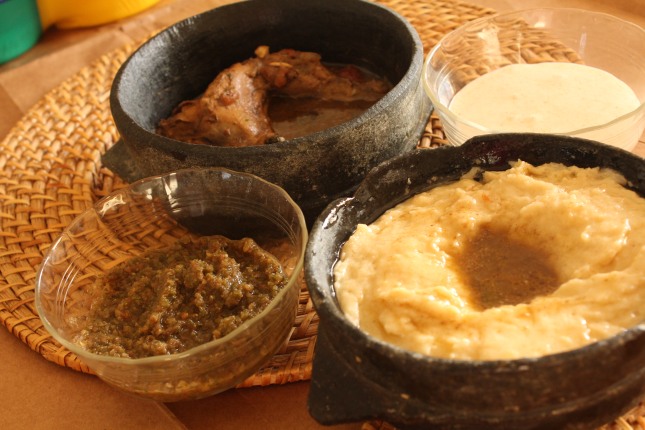 -Make a well in the center of Aseed and add the chicken broth.

-Serve Aseed, Chicken broth, the sour Hilba on the side,and spicy sahawiq bisbas (spicy tomato base sauce side) together

-Now enjoy a recipe of thousands years of old,right from the comfort of your 21st century Kitchen. 🙂